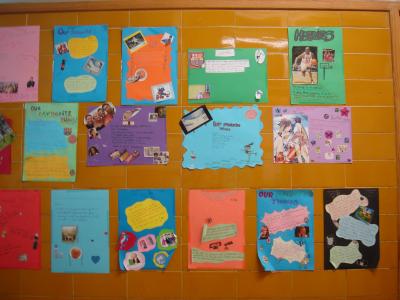 Picture: some work about hobbies in front of the Language Department.

Last week I did my first intervention in class. I had helped my teacher in other classes, but that day was my first original contribution, I did an activity in 2nd ESO C.

They were learning vocabulary about hobbies and interests, and I did a warming-up activity about this topic. I was a game: a mimic game. First of all, I gave them a piece of paper and each student wrote a hobby or interest they want. I collected all pieces of paper later and we played mime. I asked for a volunteer and a boy came in front of the class; I gave him a piece of paper with a hobby or interest and he represented it. It was funny and interesting. A lot of students participated very actively, but all students amused and were interested and attentive!

When the activity finished, I asked my tutor about that intervention. It could have been better with more collaboration in teams (for instance, writing the hobby and interest in teams, or/and thinking about the activity done in mimic in groups...) and she also made me realize that they wrote "typical" hobbies and interests, only few new ones, so I could have reinforced that point, making them think about the new words they have learnt in this unit.